When Buddy the Elf called our Visitor Center to say he’d be coming to Loudoun, he already had a pretty good idea of what he wanted to do.

“I planned out our whole day. First we’ll make snow angels for two hours, and then we’ll go ice skating, and then we’ll eat a whole roll of Toll House cookie dough as fast as we can, and then, to finish, we’ll snuggle.”

Luckily for Buddy, our Visitor Center host suggested a few other activities that showcased some of the more unique locations in Loudoun. We just heard back from Buddy about his trip, and here is what he had to say… 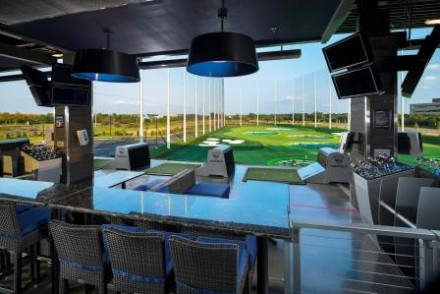 Topgolf is not ideal for snowball fights.

Loudoun. LOUDOUN. LLLOOOUUDDDOOUUUNNN. That’s fun to say! What was even more fun was the time I got to spend there last weekend! The first thing I did on Friday night was stop by this big shiny new building called Topgolf. Everyone looked like they were having tons of fun hitting what I thought were snowballs. I even tried to start a snowball fight but SON OF A NUTCRACKER if I wasn’t asked to leave before I even got started. Apparently they were GOLF BALLS! Just when I was starting to feel like a Cotton-Headed Ninny-Muggins I made my second stop. 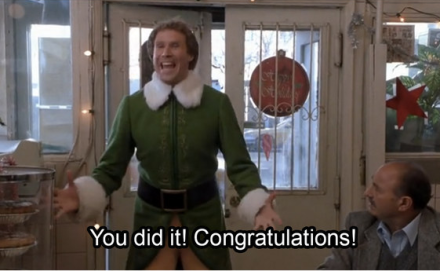 Congratulations Brew LoCo, you did it!

There is only one thing to say about Brew LoCo in Leesburg: “You did it! Congratulations! Loudoun’s Best Cup of Coffee.” It was perfect timing too, as all their sweet treats made for a perfect dinner. After Brew LoCo, it was time to head to Lansdowne Resort for the night. I calculated that I needed at least 6 minutes of sleep if I was going to have enough energy to do all my Loudoun activities. Luckily with their newly renovated rooms I had plenty of space to stretch out. As Leon the Snowman reminded me, “I’m 6’3” and have had a beard since I was 15”, so the extra leg room in the beds was nice.

The very first thing I did on Saturday was climb to the tippy top of the Blue Ridge Mountains at Bluemont Vineyard. That way, I could look out over all of Loudoun and watch the sunrise. I was hoping to see all seven levels of the Candy Cane forest, but unfortunately I could only see as far as Washington, DC. It was still enough to bring a smile to my face, which is always my favorite. 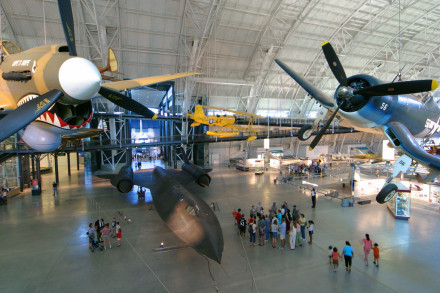 The IMAX isn't the only big attraction at Udvar-Hazy!

Climbing so high up made me hungry, so I made my way over to Catoctin Creek Distilling Company for a maple syrup tasting. Syrup is one of an Elf’s four main food groups, so I knew it would sustain me for the rest of the day. I was going to make my way back to Lansdowne to relax, until I remembered that I shoved 11 cookies into the VCR and ruined everything. So instead, I headed to the Udvar-Hazy Air and Space Museum. Have you guys ever seen an IMAX movie screen!? They’re GINORMOUS! I gotto see Star Wars: The Force Awakens! I don’t want to spoil the movie, but good news… I saw a dog today.

I started Sunday with a visit to Mom’s Apple Pie. I wanted to get a snowberry pie for my friend the Arctic Puffin, but they were out. There was a woman behind the counter with a face so pretty it should be on a Christmas card, and she suggested I get the Wild Blueberry Pie. It tasted delicious, but I would have called it purply, not blue! 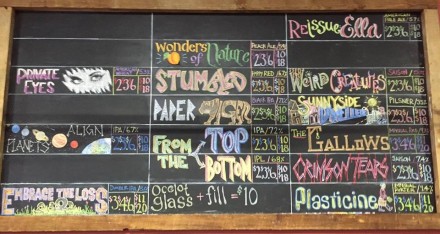 What is more vulnerable than a Peach Ale?

All of that pie made me thirsty, so I went over to Ocelot Brewing Company. Since they never brew a beer more than once, I was lucky enough that they had “Wonders of Nature”, a Peach Ale, on tap. There is nothing more vulnerable, or delicious, than a Peach Ale!

Not enough Christmas cheer to get this carriage into gear.

It was starting to get time for me to head home, but I realized that I didn’t have a ride! I decided to make my way over to Morven Park’s Winmill Carriage Museum. With more than 40 antique carriages and sleds, I was sure there would be something I could fix up to help fly myself home. Unfortunately, I’m not as good as Papa Elf (although I still have time, he didn’t make Master Tinkerer until he was 490 after all). Luckily I found the number for Reston Limo from Visit Loudoun’s website. While it was tempting to join one of their winery or brewery tours, they agreed to drive me all the way back to the North Pole!